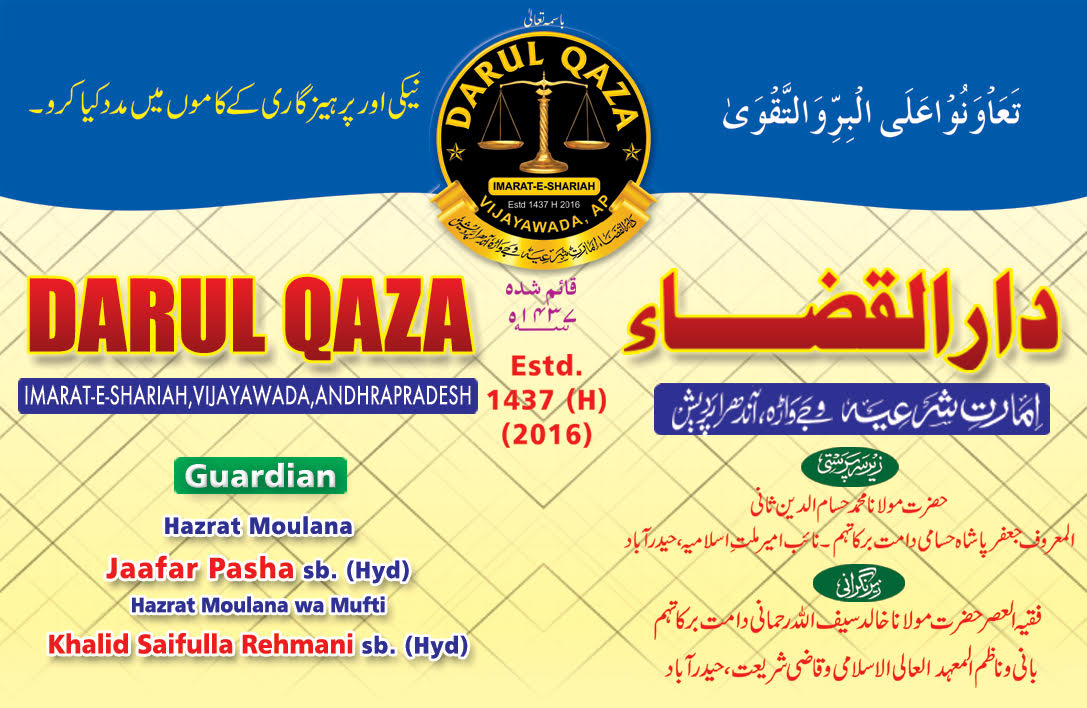 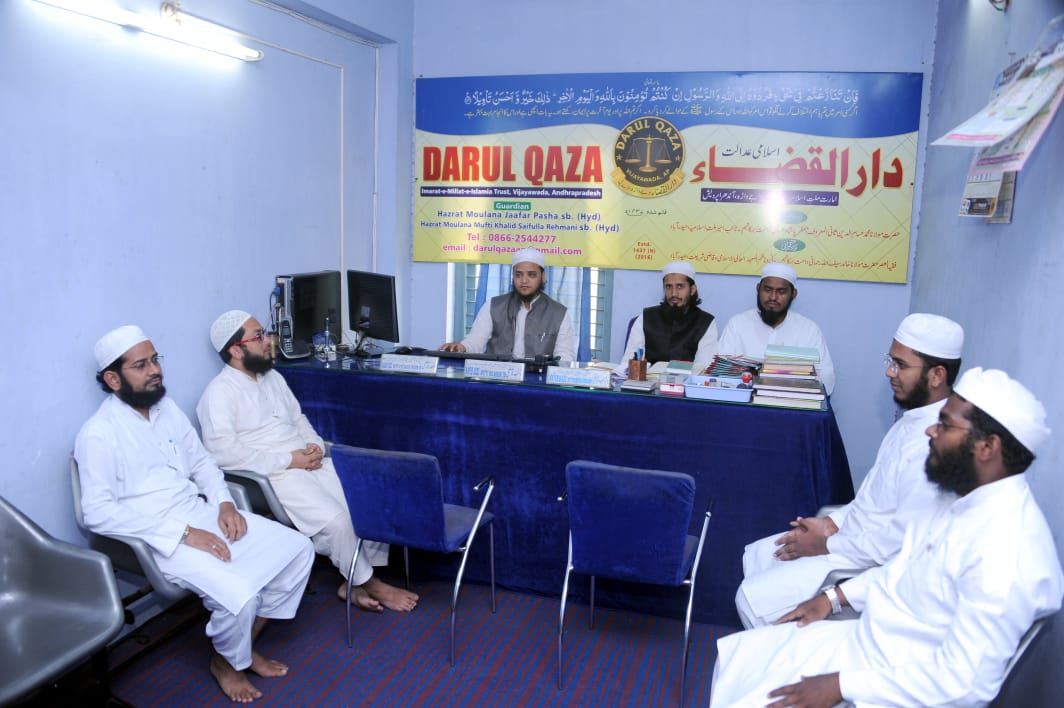 Darul Qaza is a religious institution to resolve family disputes arise among Muslims.It is also called counselling centre.The head of the Department is known as Qazi,under whose guidance people get rid of their misunderstandings.He counsels parties to sort out the concerned matter by mutual consents.People in need may contact.

The nature of human being:

A human being in his social life undergoes two situations: Individual and congressional. He spends most of the time of his life in an aggregative way. Since human being was created mentally different by nature, differences are prevailed in every mind-set. This leads to quarrelling between them. This situation is definitely avoidable for a gentleman. It is very logic that the third entity or any third item must be criteria to get rid of such critical situation. Therefore we see that every nation and every religion of the world has some rules and laws to solve their disputes.

System of Qaza in Islam:

Islam also has a strong law which is absolutely eternal. This law is totally based on the Holy Quran and Sunnat (tradition) of the prophet Muhammad (SWS). A man can easily utilize this and get his disputes solved following a simple procedure. This system is called Qaza, the person who judges according to this law is terminologically named as Qazi-e Shariat, and the place where this auspicious procedure is done is called as DarulQaza.

Islam has command edits followers to solve their disputes on the basis of Quran. Allah says: O you who believe! obey Allah and his messenger and those who are responsible of your matters, if you have a quarrel between you, then turn it towards Allah and His messenger (or His assistants) if you believe Allah, His messenger and on the day of judgment. (Surah Nisah: 59)

It should be noted that Muslims have been organizing this system of Law since the prophet Muhammed’s (SWS) era, and is going on till today without any stoppage. When Muslims came in India they brought this system too. The then rajas and nawabs also accepted this system for Muslims. When they came into power took this system under governmental guardianship. It remained superbly in Indian history till 1864 AD. Unfortunately when the British rulers dominated India they could not digest this system and stopped appointing Qazis. However in 1921 AD.Moulana Abul Mahasin Sajjad (RH) a well-known Islamic scholar of Bihar state established ImarateShariah and organized Nizam e Qaza privately. The Imarat e Sharia Phulwari Shareef Patna has a network of Darul-Qazas in Bihar, Jharkhnad and Udaisa. The All India Muslim Personal Law Board also has passed a resolution for the establishment of Darul- Qazas all over the country, at the public meeting held in Kolkata in 1992. The purpose of this system is hereby to provide justice to wronged people in short time and without any heavy expenditure; besides it decreases the burden of our courts.

Hazrat Ali (RZA) reported to have said that the prophet Muhammad (SWS) recommended him saying: O Ali! When two persons come to you to solve their disputes, do not deliver your judgement unless you have heard other’s statement too. (Sunan Tirmizi: 1331)Therefore this rule is applied in all Darul-Qazas, run by All India Muslim Personal Law Board and Imarat e Shariah Phulwari Shareef Patna. It is compulsory that the person who wants to get justice from Darul-Qaza must file a plea in the presence of Qazi Shariat and request him for the justice. The Qazi summons the defendant party for his written statement. Then both parties are called upon for hearing their disputes on a prescribed date. Qazi Shariat hears their matters carefully and recommended them to settle the matter by reconciliation. Most of the cases are solved by mutual consent. However if they do not agree on any point, which happens hardly in a few cases, Qazi Shariat delivers his judgment according to the Quran and Sunnah of the Prophet (SWS). In some cases the second party viciously refuses to appear in Darul- Qaza or is missing for a long time, and then Qazi Shariat tries his level best to know his point of view and then finalizes the case as per the ruling of Shariat.

How judgments of Darul-Qaza are implemented:

Nowadays some people are accusing Ulama that they enforce their judgments and fatwa’s on the public. Actually it has no connection with the realty. Darul Qaza has no police authority nor do they have force for implement their judgments, still people follow them on the basis of Iman and fear of Allah. As Allah says in the Holy Quran:

O Muhammad by your Lord! They will not be a true Mumin (believer) unless they make you judge to solve out their disputes, and whatever you finalize they must obey that, and find not any hesitation in their hearts to accept it. (Nisa: 65)

However to accept the judgment of Qazi is a command of Allah. It is a source of goodness in the world and hereafter too.